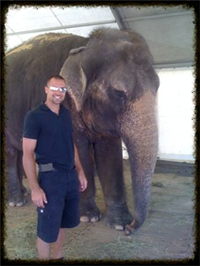 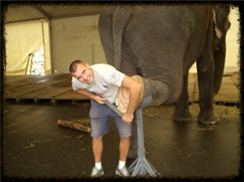 Mike and Horses and What?...

I began my farrier career in a stranger way than most! In a BIG way! When I was in college I studied for a national diploma in animal care. During college I attended a wild life park twice a week, I volunteered in all the different animal departments, and spent time with big cats, apes, paddock animals, monkeys reptiles and everything you could imagine!

I spoke to my college tutor and explained my love for the elephants and horses and that I only wanted to spend time with them. After college I was offered a full time job working with elephants. This is where I started to develop a love for animal feet.

Since then, I have worked in wild life parks, safari parks, and zoos all over England. I even helped in the raising of the first ever successful penguin birth at Woburn Safari Park (now you think having a puppy at home is hard work!).

That lead me to Ringing Bros and Barnum & Bailey Circus where I become the Head Elephant Trainer. As I traveled around the United States I consulted with other foot professionals and spent as much time as I could with other professional farriers. I would show them how to trim elephant feet and in return they would expand my knowledge with horse feet.

I spent my vacations with other farriers mainly in CA and TX where I spent some time with CJF Jake Whitman who was recently one of the farriers at the World Games. I then attended farrier school at Pacific Coast Horseshoeing School under Bob Smith (Educator of the Year and International Horseshoeing Hall of Famer) where I graduated in the top 1% of my class with the second highest score in the twenty-two year history of the school. 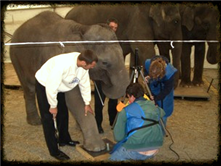